“People of all genders are remarking on how Lyne “took every reasonable precaution” and yet it still happened. Do you know what that means to women? It means that you can do everything right–check off all the items on your personal safety list–and you can still be killed by a man. It means that the idea that you can prevent your own rape or murder is bullshit, an illusion of rape culture that promotes victim blaming and misogyny. It means the perpetual precautions you take every moment of your waking life are quite probably a colossal waste of time.” 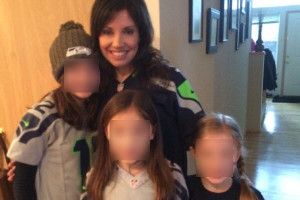 Image shows Ingrid Lyne with her arms her three children (whose faces are blurred for privacy), all sporting Seahawks gear and smiling into the camera. (Image courtesy of the GoFundMe campaign to benefit Lyne’s children.)

Unless you’ve been living under a rock, you’ve probably heard about the murder of single mom, Ingrid Lyne. As a single mom myself who lives not too far from where Ingrid was raising her kids (and was then later found in a recycling bin), the whole thing gives me the chills.

Frankly, women everywhere are getting the chills. Unlike most of the men I talk to, they don’t see it as a freak occurrence, but as the realization of their worst fear and the ultimate failure of their ongoing efforts to avoid their own rape or murder.

Every woman I’ve talked to knows it could have been her. People of all genders are…